Writers Note: I interviewed Valerie Laplaca for a profile assignment for my reporting and writing across platforms class. This was my first time finding a person to interview that is within the beat I was assigned (which was Arts and Entertainment) and figuring out a story/ news hook on my own.

ATHENS, GA – A University of Georgia art student has been doing art since before she could remember, but the pandemic has affected her journey of getting an art education.

Many artists and creatives have been negatively impacted by the pandemic and even though everything is different now, COVID-19 has not stopped Valerie Laplaca, who is double majoring in art education and ceramics, from continuing her studies and art.

“I think it’s really affected the community aspect of art because a lot more people are doing it online, even if we’re allowed to come in here. I mean, all the art majors are allowed to come into class, but a lot of people don’t because they don’t want to, and I don’t blame them,” said Laplaca about COVID-19.

Laplaca began working with ceramics her freshman year of high school and since then she has dedicated a lot of her life to her work, sometimes spending entire days working at the UGA ceramics studio.

With her art, Laplaca says it mostly just happens. She might have a dream and she’ll wake up and sketch it, but most of the time her work never turns up like the sketch.

“I focus on letting the clay speak for me and decide what it wants to do instead of trying to over control something, because then I think you lose a lot of really valuable voice in the piece,” said Laplaca.

Even though most of her ideas for her art come from dreams she has, Laplaca is inspired by people, specifically surrealist artists and other ceramic artists on Instagram, and nature.

“She’s honestly got some of the most unique art out of all of the artists I’ve met. Her work has its own flavor, its own identity, and I think she constantly pushes her boundaries,” said Emma Knapp, Laplaca’s fellow art student who has known Laplaca for two years. 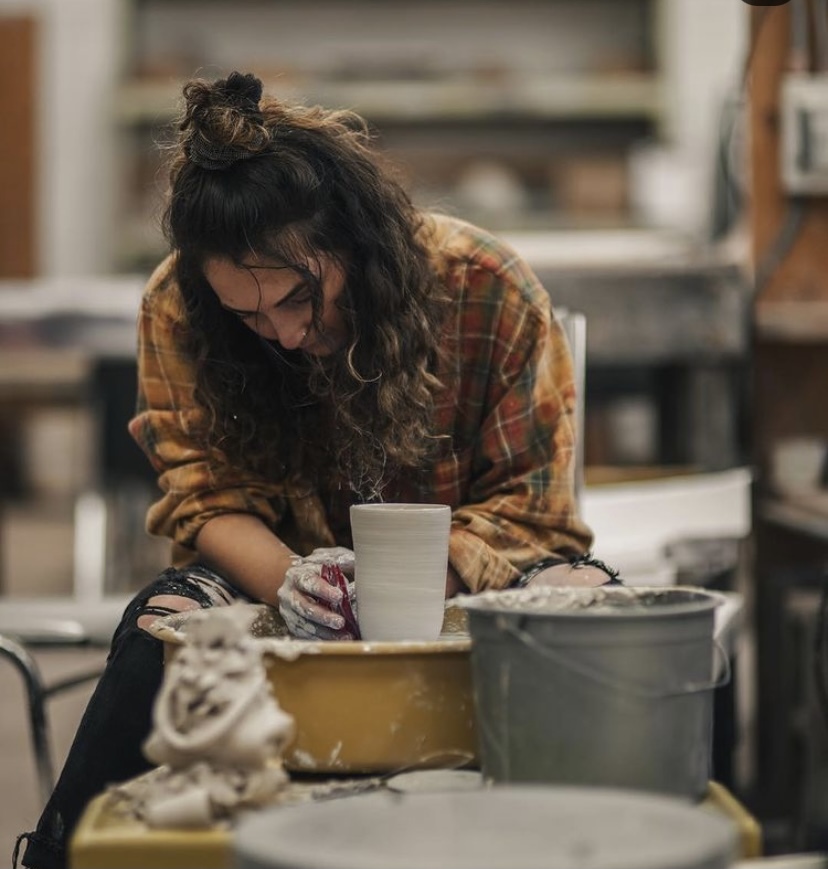 Due to COVID-19, the way Laplaca has to study and work on her art has changed. Laplaca says the biggest thing that changed is the community aspect of art and working with fellow artists.

Artists and creatives are some of the most severely affected by the pandemic, according to a survey by Americans for the Arts, with 95% reporting loss of income, 79% experiencing a decrease in creative work that generates income, and 67% are unable to access the supplies, resources, spaces, or people necessary for creative work.

Specifically in Athens, 77% of artists had a significant loss of income and 66% were negatively impacted by the cancelation of performances, exhibitions and various other public events due to COVID-19, according to a survey done by The Athens Art Alliance.

The pandemic has affected many students, but art students especially have been negatively affected, according to Makeda Easter for the Los Angeles Times. With art students, much of their work relies on training in person, staging shows, and having access to expensive equipment. Because of that, many students and art students in particular have decided to take a gap semester or year, but Laplaca never even considered it.

“I don’t know what I would do for a gap year. If I wasn’t here because this facility is basically where I work. So if I did take a gap year I would be like super sad,” said Laplaca.

“With critiques and stuff, we have to be socially distanced. We can’t pick anything up. And that kind of sucks. Because ceramics is one of the art forms where you can hold it and share it and we haven’t been able to do that,” said Laplaca.

Every year, Laplaca signs up for multiple art shows to try and get her work out there. In high school, Laplaca even had a sculpture shown at Parsons School of Design in New York and got awards from Alec Baldwin and Tim Gunn. This year was different, though, because Laplaca was not able to sign up for nearly as many art shows because they weren’t happening.

Throughout 2020, art shows and exhibits have been canceled and are not being shown or planned due to COVID-19. Even though some places like the Miami art scene might be starting to come back up with shows and galleries, according to Brett Sokol for The New York Times, most places around the world continue to stay closed.

Just recently, Laplaca had an art piece shown at the MUSE Art Exhibit in Atlanta, the first art show she’s been a part of since the pandemic started.

The exhibit was small, socially distanced, and only one night, but after many long months, it finally gave Laplaca and many artists a chance to show some of their work.